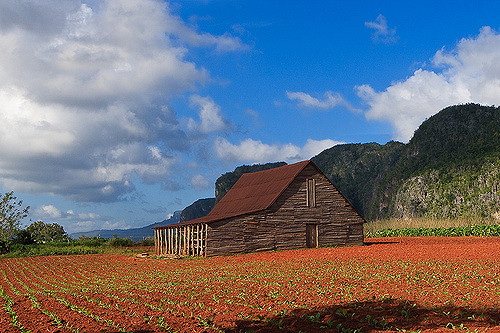 Part of the fun of smoking cigars is learning about the various countries that produce cigar tobacco. Many variables affect the makeup of a cigar, and the starting point of the tobacco greatly influences each and every cigar. Knowing the origin of your cigar can add to the smoking experience as you find the variety of manufacturers and their characteristics that are just right for you. Here is our top ten list of tobacco-producing countries:

1. Cuba
Cuba is the most popular producer of cigars in the world. These cigars stand out because they are made from high quality materials and a lot of care and attention goes into the making of every single cigar. In fact, it has been estimated that it takes over one hundred steps to properly produce a single Cuban cigar. Unfortunately these still hard to find in the United States due to the trade embargo of 1960. Give it some time and we will be seeing these soon.

2. Dominican Republic
The Dominican Republic was the first country to commercially produce tobacco for cigars. That’s right – not Cuba. The tobacco grown here is known for its smoothness but recently they have been producing more bold flavors.

3. Nicaragua
Some of the finest cigars in the world come from Nicaragua. This is no surprise when one considers that many of the finest blenders and rollers came to this lush and humid nation following the Cuban Revolution.

4. Honduras
Honduras is home to some of the boldest and richest tobacco in the world. The famed Cuban-seed Corojo tobacco was first grown here after leaving the island of Cuba.

5. Ecuador
A relative newcomer to the tobacco growing countries, Ecuador entered the market only 10 to 15 years ago. The humidity and cloud cover of this west coast South American country is perfect for growing a special dark tobacco leaf. The Habano leaf is primarily used becasue of its exquisite dark and spice wrapper leaf.

6. Mexico
Mexico has recently been producing some great Maduro wrappers known as Mexican San Andres, and they rank right up there with Connecticut broadleaf wrappers.

7. Brazil
Brazil has been producing a unique extremely powerful leaf as of late. This dark and fermented leaf is a welcome arrival to the tobacco scene.

8. United States of America
The USA has been producing wrappers for the finest cigars for over 100 years. Famous for its smooth Connecticut wrapper, The United States produces some of the best dark leaves seen in the Connecticut broadleaf.

9. Jamaica
This Caribbean island nation was one of the first producers after the Cuban revolution but nearly lost its tobacco industry in Hurricane Gilbert (1988). The land has since has slowly recovered and is now procuring fine tobacco once again.

Popular brands: Macanudo
Character: mild with a hint of spice

10. Cameroon
While rare and hard to get, Cameroon has burst on to the cigar scene with its Connecticut shade-grown leaves. The African climate is perfect for growing the Cameroon wrapper leaf, often referred to as “toothy” for its easily recognizable grain.